Types of golf clubs according to their material, characteristics and use by level 

Every golfer should know that the equipment they use to play their game is fundamental, both for practice and competition. In the world of golf, the choice of a complete bag of clubs is a very important aspect at every level. Whether you are a beginner in the sport or a pro playing golf, you should know which clubs are the best choice to play each round on the course. From Lanzarote Golf we provide you with a brief guide to the clubs that exist, their characteristics and why you should choose each of them according to your level.

Types of golf clubs and their characteristics 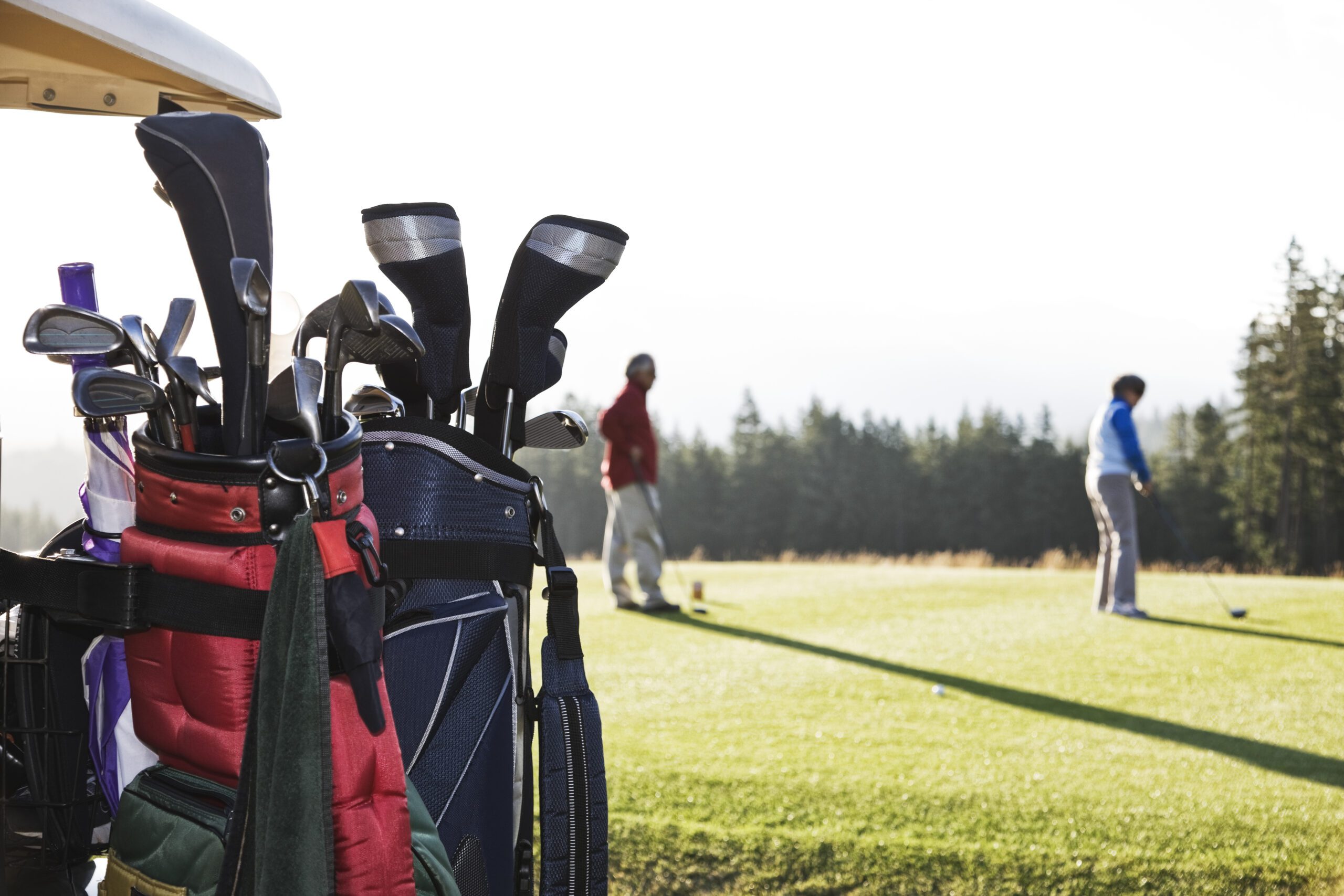 When we are about to complete our bag of new equipment, or renew some of our old ones, we should bear in mind that there is a wide range of clubs and that each one of them has specific characteristics and functions.

An important aspect to consider in golf clubs is what type of loft they have. And you may ask what a loft is. Simple, when we refer to loft, we are talking about the inclination in degrees that the club face has in relation to a vertical line perpendicular to the ground.

This inclination is what determines the height of the ball after a shot is made. Clubs that make more distance tend to have less loft, due to the fact that at impact the ball takes off with less height and obtains a greater distance. On the other hand, the higher the loft, the greater the height but the shorter the distance.

Within the possibilities that exist, clubs can be classified into four main groups:

Woods, despite their name, are made of steel or titanium. They are the clubs with the lowest loft, so you can reach greater distances with them. They are preferably used for longer shots such as teeing off. They are categorised into two groups:

Driver. Also designated as wood 1, it is used for long distances. It is the most expensive club and the most difficult to handle. Due to its power in one stroke, it requires great technique and precision.

Fairway woods. These are numbered from 2 to 11 and are designed to achieve long shots on par 4 or par 5 holes. They are usually used on the second shot to achieve a greater approach in a smaller number of strokes. The so-called utility woods are those between numbers 4 and 11.

The irons are the clubs that differ very well from each other by the type of loft. As we mentioned before, depending on their loft, the distance you are going to reach with your iron depends on its numbering and inclination. There are exactly two main groups of irons:

Numbered irons. The numbering that exists in this category ranges from 1 to 9. Specifically, the number of the iron determines the loft and its height capacity and distance range, the higher the number of the iron, the higher the angle and therefore the greater the height. This range goes from 14º for the 1 iron to 41º for the 9 iron. The range of distance you can reach with these clubs is between 100 – 180 metres, approximately, depending on the number you choose for your shot.

Wedges. These models are very specific, because they are marked by the initial of their specific name. They are the clubs with the most loft in the entire bag. The degrees of the wedges range from 45º to 64º. They are used for situations where a lot of height, high angle and little displacement of the ball after landing is required, such as getting the ball out of the bunker, for example.

They are the most versatile and least complicated clubs to use, their reason being the fusion between wood and iron and with them you can reach wood distances with the comfort and ease of use of an iron. In a way, they can replace fairway woods between 3 and 11, and fairway irons between 1 and 5.

Distances in metres for each golf club 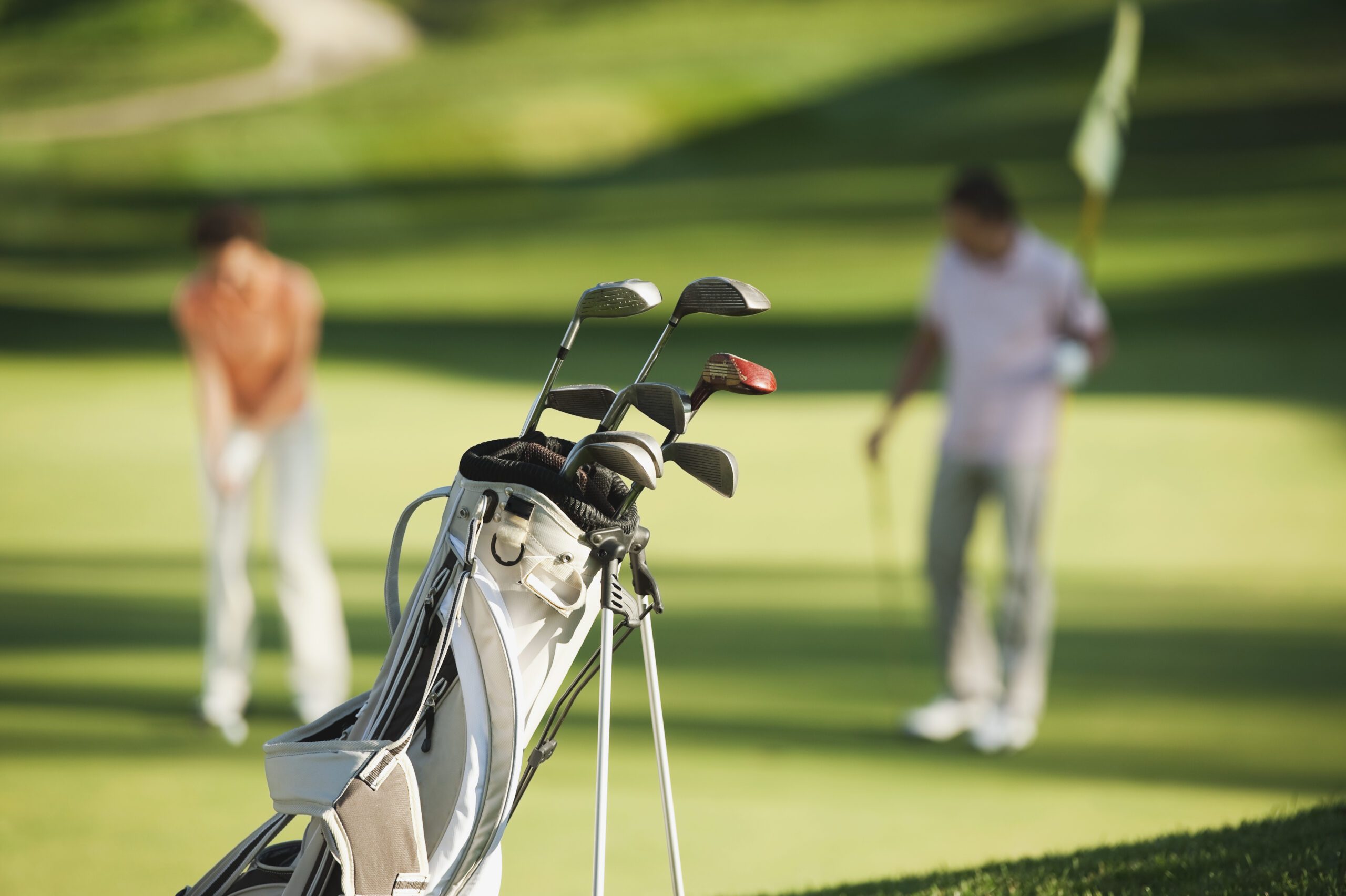 As we have explained while classifying the types, each club has a distinction in terms of the distance that the ball can travel when hit. For you to get a practical idea of how to use each one of them, these are the most common distances of the 14 clubs that an amateur player’s bag could include:

Types of golf clubs by the type of player 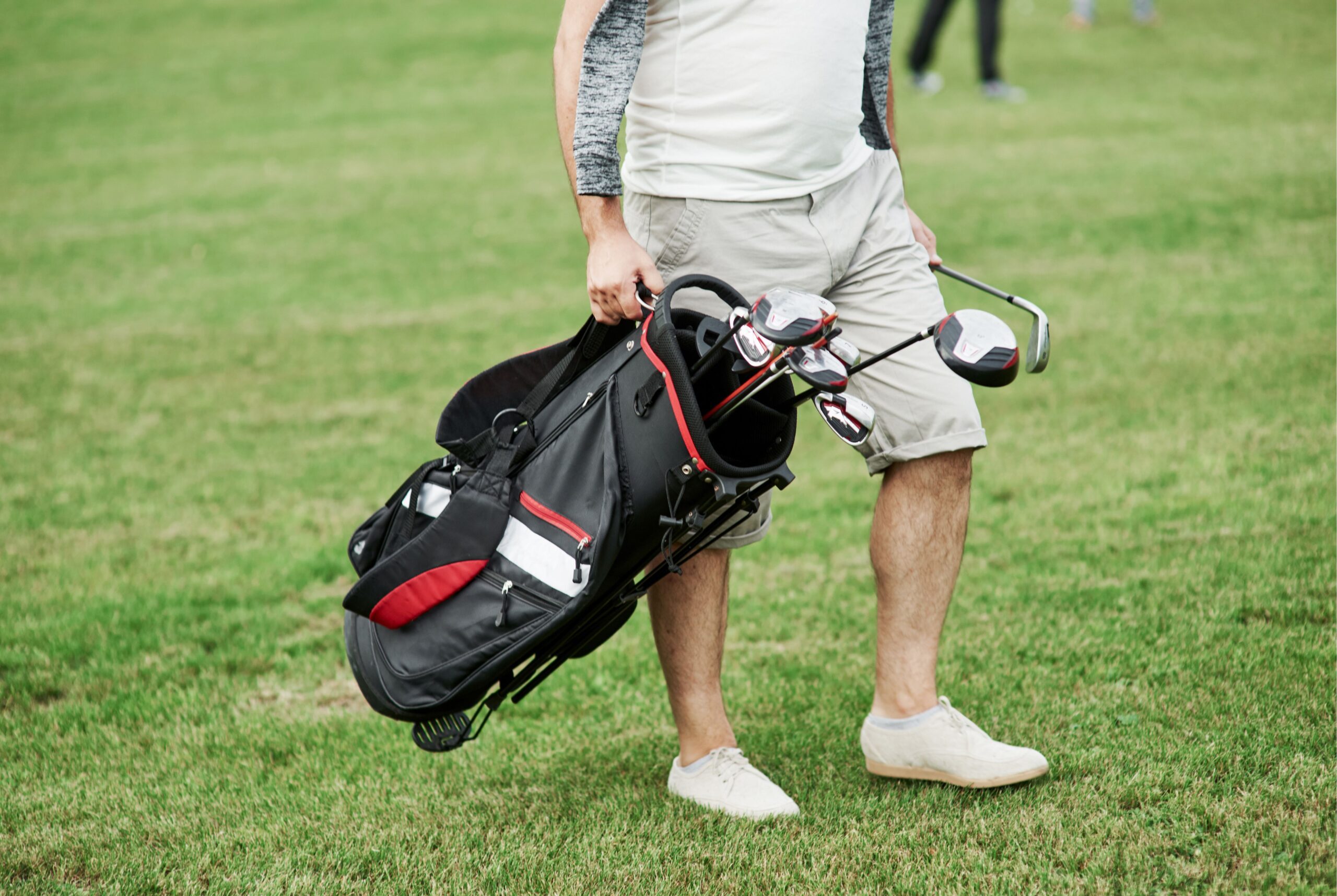 Having explained the characteristics of the types of golf clubs that exist, we have to take into account the level of each player’s game. Depending on the level, golf clubs can be divided into two classes:

Game improvement irons are the clubs designed for the amateur player due to their versatility, easy handling and technology, designed so that the worst movements do not damage the game so much. They usually have a hollow, open or closed, behind the head which helps to lift the ball with not quite perfect impacts. In other words, this feature helps the ball to have a good flight if the impact has not been very good.

Player Irons or forged irons. These are the irons that are usually chosen by experienced players on the course and because of the way they are made, based on forged iron. These clubs are designed based on a specific pattern and technology to extract the full potential of the swing of the professionals.

The bag of an intermediate level player will have a combination of clubs from the two groups mentioned above. Practice and improvement in the sport creates the need for new or better clubs to complement the swing.

How to choose the right golf clubs? 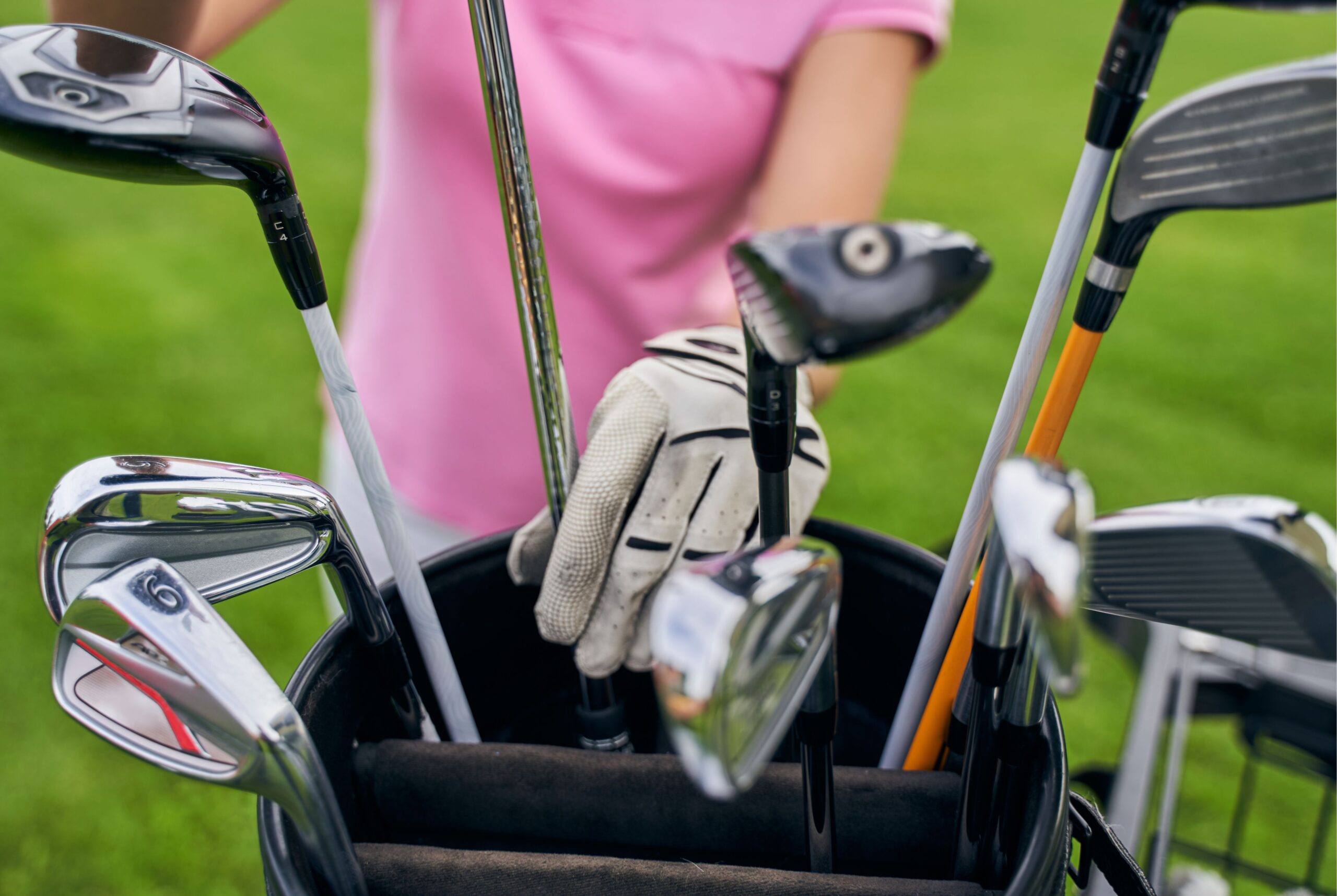 If you have reached this point of the article, you are determined to start in the world of golf or surely, you want to improve in it. It is common to think that this choice is a difficult aspect of the sport and in a way it is. However, after getting the information you can get an idea of where to start, or where to go from here.

If you are a beginner, at Lanzarote Golf we have Pros who can teach you the basics of this wonderful sport. Initially, it is usual to rent or buy a second hand set of clubs to suit your experience, in this beginners’ golf article, we give you an example guide to what clubs a beginner should normally have.

Once you have taken lessons and are getting a defined swing, you can start to choose other types of clubs that suit your game. Even depending on the course, you will like some irons more than others. In the same way, we have already explained the club options for an amateur player.

The moment you start to feel that you are killing it on the course, maybe you could start thinking about choosing more pro clubs. You can even go for a fitting. In other words, make a purchase advised by a professional in the field or acquire personalised clubs, adapted to your level of play, swing speed, etc.

Whatever level you have, at Lanzarote Golf we are ready for you to practice, improve and delight us with your swing in all the tournaments we hold throughout the year. The best way to enjoy this sport is in the company of friends or rivals worthy of beating.  We hope to see you swinging at Lanzarote Golf soon. 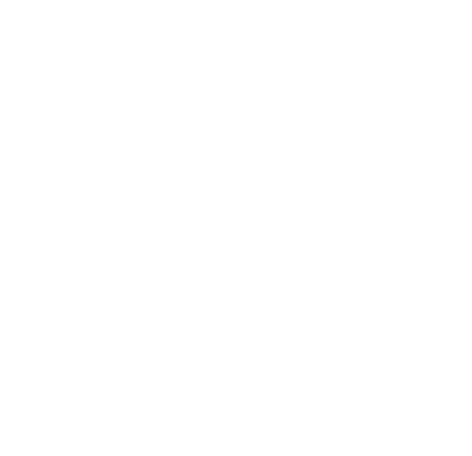